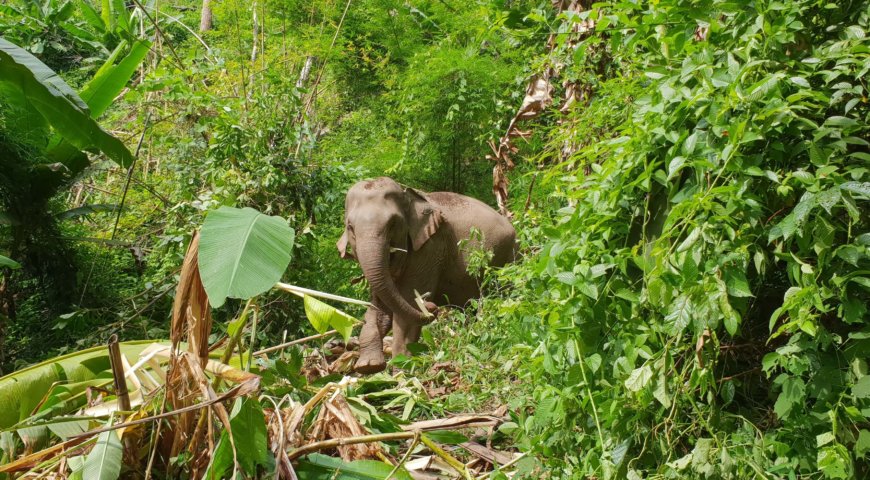 Releasing elephants into the wild, a world’s first?

With our soft release project, we are running a final test to see whether captive elephants can be returned to the wild. Our goal is to create cohesive family groups to strengthen the wild population. It has been well underway, and the results look very promising. But are we the first to release elephants back into the wild?

The mahout culture in Laos has been around for thousands of years. Elephants were traditionally kept as pack animals. They would bring in harvests of rice and crops from the fields. Likewise, they would bring wood from nearby forests back to the village. Later, the logging industry became a lot more profitable with the growing foreign interest in hardwood. On a closer look, it becomes clear that they had their own reasons to make sure the elephants kept a connection to their wild side.

Until recently, Laos didn’t have a lot of land suitable for extensive agriculture. The fields that could be worked were reserved for crops such as rice and vegetables. Villagers also resorted, and in rural areas still do, to the forest. With a low population and a lot of jungle available, the impact of their hunting and gathering was quite low.

As you can imagine, elephants eat large quantities of food. It would have been difficult to grow enough grasses to feed them. Therefore, elephants were put to graze in the jungle. There, the elephants would have access to various plant species in large quantities. Coincidentally, they would feed on the same forage their wild counterparts would. For this reason, a large part of the captive population is still capable of providing for itself in the Laotian forests.

Weather conditions in Laos aren’t good for working the entire year-round. During those periods, elephants would be brought back to the forest. Here they could roam free until the elements became favorable again. It allowed the owners to focus on other work, instead of moving their elephants to new pastures each day.

Sometimes the elephants could stay in the forest for months without seeing their owner again. Some of them even rejoined their family groups from before. Coupled with the fact that they still need to provide for themselves, explains why they were never domesticated. Captive and wild elephants are still the exact same species.

Making sure that their elephants had enough to eat wasn’t the only reason their owners brought them back to the forest. Capturing elephants from the wild is a very difficult feat. It is dangerous for the elephants as well as the humans involved. Training a baby raised in captivity was easier than a wild one.

For that reason, females were put in regions were wild bulls would roam. The owner would let nature run its course and have a pregnant elephant if he was lucky.

The story of Mae Kham Moane and Noy

While doing our research in the villages of Nam Pouy, we ran into Mae Kham Moane and her two-year-old calve. This mother and baby are staying in the forest for a couple of months now. The owner keeps them there because he didn’t have any work for them to do. While they are in the protected area the mother shows her calve exactly what plants to eat. She shows it how to behave around other elephants and wild animals. If they could stay there, they would have made a great addition for the reintroduction program.

Sadly, we found out that the owner was convinced to bring them to a camp in Luang Prabang. That means Mae Kham Moane and her baby might be taken away from the forest they were brought up in. They will go to an area that can’t provide them with the same forest coverage, let alone the same amount of food.

We do understand the need for an income for the owners of the elephants. Then again, these are kept in very natural conditions, without needing too much attention. Wouldn’t it be better to keep them there instead of moving them 600 km?

Our soft release would not have been possible without the knowledge of the mahouts. All our keepers come from the province of Sayaboury. Most of them have lived closely to the Nam Pouy area since they were born. They would have followed their parents’ elephants through these trees, learning all there is to know.

With this soft release, we are combining the know-how of the communities with modern techniques. The mahouts helped us pick the right region with enough food, water, and mineral deposits. They also told us where and when the wild elephants would be so we could see how our group would react. Before, they would be working in the forests for logging companies, and now they help to protect it.

While following the herd on their adventure we take observation notes and place camera traps. This data is then used for our scientific research on forming elephant herds. In addition, we keep track of their migration with GPS-technology to monitor the size of their new-found habitat. We then combine existing maps with our own findings, constantly improving them.

This mixture of old and new is the base of our conservation strategy. By learning from, and empowering the local communities, we want to create sustainable connections for the ECCs’ work in the future.

One thought on “Releasing elephants into the wild, a world’s first?”

To get through these troubled times, our elephants need you. Click to help