BACK TO THE WILD

Our Adventure with Lao Elephants Started in 2001...

ElefantAsia, a French NGO founded in 2000 decided to launch a campaign to raise awareness for the need to protect the Asian elephant in Laos. In 2001, the Elephant Caravan walked 1300 km across Laos, from the Southern town of Champassak to the Northern cultural capital of Luang Prabang. The event was a huge success and both the mahouts who participated in the caravan and the Lao Government asked ElefantAsia (the NGO was created for the caravan) to stay in Laos and design a national management plan for captive elephants.

In 2005, ElefantAsia and the National Animal Health Centre of the Department of Livestock & Fisheries (Ministry of Agriculture & Forests) began the “Lao Elephant Care & Management Programme”. During 7 years, both organisations worked hand in hand to provide working elephants with free veterinary care (using mobile clinics) while their mahouts were trained in basic first aid vetcare (using the Elephant Care Manual, co-published by ElefantAsia and the FAO and free first aid kits+training by international vets). All captive elephants were registered using microchips, official ID books and a state-of-the-art computerized database, all of which are still in use today. A national reproduction initiative known as the “Baby Bonus Programme” was also implemented.

Realizing that the logging industry was no longer attractive to elephant owners due to lack of work and rampant deforestation, priority was given to professional reconversion of mahouts into ecotourism. The Elephant Conservation Center was born.

In 2010, the ECC was created and registered in the Sayaboury Province, home to 75% of Lao captive elephants. The Center was built on the banks of the Nam Tien Reservoir, a provincial protected area. With the only Elephant Hospital of Laos and a large land concession allowing for natural breeding and socialization, the Center started purchasing elephants from owners who decided to sell their animals throughout the country. Year after year, the Center grew in stature and capabilities mainly thanks to income generated by paid visits to the site.

In 2012, ElefantAsia handed over its programmes to the Department of Livestock and Fisheries. The ECC entered a new partnership with France based NGO “Des Elephants et Des Hommes” (Elephants & People). 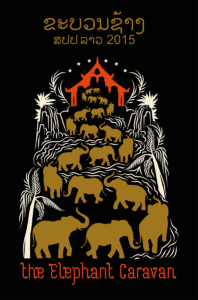 In 2015, the ECC organized a second Elephant Caravan across Sayaboury and Luang Prabang provinces. The goal was to take 20 elephants and their mahouts to Luang Prabang on the occasion of the 20th anniversary of the city’s World Heritage status as a reminder that elephants are part of Laos’ cultural and natural heritage.

In 2017, the Prime Minister of Laos stopped the illegal export of 13 Lao elephants bound to the Middle-East and chose the ECC as the most suitable facility for their rehabilitation.

In 2018, ECC signed a Partnership Agreement with the Smithsonian Institution to pursue its scientific research programme. It was also offered the management of the Nam Pouy National Protected Area by the Sayaboury Province. Nam Pouy has a population of about 50 wild elephants. Monitoring and protecting this population and its habitat has become our most pressing objective, as well as rewilding captive elephants currently under our care…