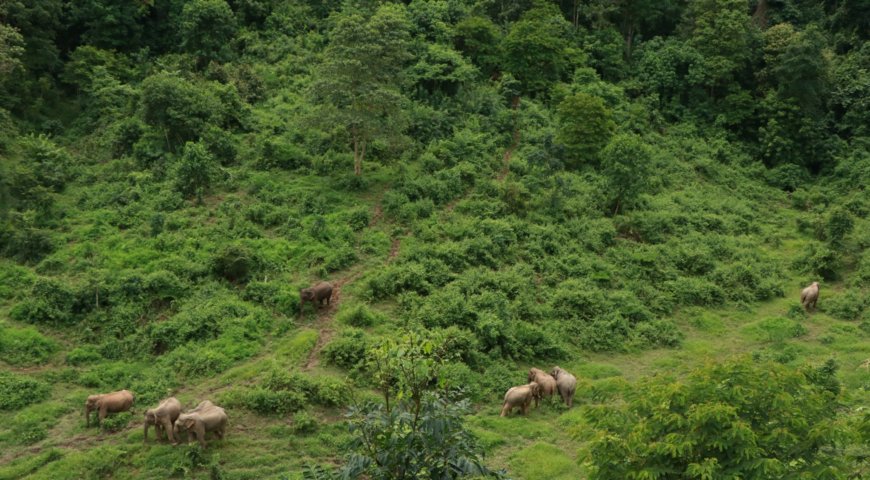 Bringing elephants back to the wild, a closer look

The Elephant Conservation Center has been taking big steps towards one of our main goals, releasing groups of captive elephants back into the wild. Since March 2019, a group of 5 elephants has been living in the neighboring national park, Nam Pouy.

But how did we get here, and what are the following steps?

At the ECC, we have 6 important parts that make up our release program:

Our starting point, the elephants

The center starts off with acquiring elephants that have either been working in logging or in tourist camps. We choose to buy them so we can make sure that we have full responsibility for their well-being.

A group of 16 elephants was rescued from being trafficked illegally abroad in 2018. The Laotian government brought 12 of them to us as a show of trust in our project. The ECC has the governments’ support to include these elephants into our release program.

When they arrive at our concession, we check if they are healthy enough to join our breeding program. To ensure the existence of elephants in the wild in the future, we need to make sure that we can release a group with individuals of all ages.

Through thorough testing of blood and fecal samples in our own laboratory, and ultrasound checks, we can see whether a female elephant can still reproduce. Some females have never had calves before they are 30. This can complicate the pregnancy.

Females that are cycling are put together with a male in one of the large zones in the center. We opt to keep the breeding as natural as possible so it is the female who chooses when she is ready.

After spending a while in the forest to adjust to their new environment, we slowly introduce them to other elephants. They all have different characters, and it is important that they fit in well with their new group.

Once we know who gets along with who, we put them together for long periods of time in our socialization areas. Here they are free to interact with each other, under the watchful eye of our biologists. We take notes on their behavior and how much time they spend close to other members of their group.

When a group is close enough it starts to act like a herd would do in the wild. Then, we can plan our prerelease test. For this, we would bring the elephants to the other side of our concession. Here they are free to roam around together day and night.

After a couple of days without human interaction, we check whether the bonds have stayed intact. If the group shows the same behavior as they did during the socialization process they are one step closer to going back to the wild.

Back to the wild

The next stage is this soft release. It is meant to test out our theories on creating herds of unrelated elephants and our elephant’s capability to survive in the wild. The elephants will remain in the Nam Pouy National Protected Area at least 8 months, with no human interaction.

If at the end of this experiment the elephants remain close and do not approach villages, we will have a strong case to release them and continue this method of reintroduction. The soft release with close tracking of behaviors helps to determine if this herd can be considered for a real release as well as assess the herding program at the center.

Why is it important to release groups and not individuals?

Elephants in the wild live in family groups, called herds. Each member of the herd will look out for the other ones and protect the calves in the group. They would move together throughout the forest looking for food, water, and mineral deposits.

If we release an elephant by itself it would be more likely to return to the villages and create conflicts. They don’t develop ties to the new forest they are released in and might get scared of other groups of elephants in the region.

Is this something new?

The mahouts around the National Protected Area have been working in this region for centuries. When they didn’t have any work to do, they would release their elephants back into the wild. It would only be for a short period of time and not to fully return them back to the forest.

The ECC has set up a protocol with different steps to follow. The knowledge of the mahout community has had an influence on this process. It is also the mahouts of the region that are tracking the elephants throughout the forest. Giving this ancient lifestyle another chance to continue to exist.

To get through these troubled times, our elephants need you. Click to help